ON NOW: VOICES OF ABSTRACTION 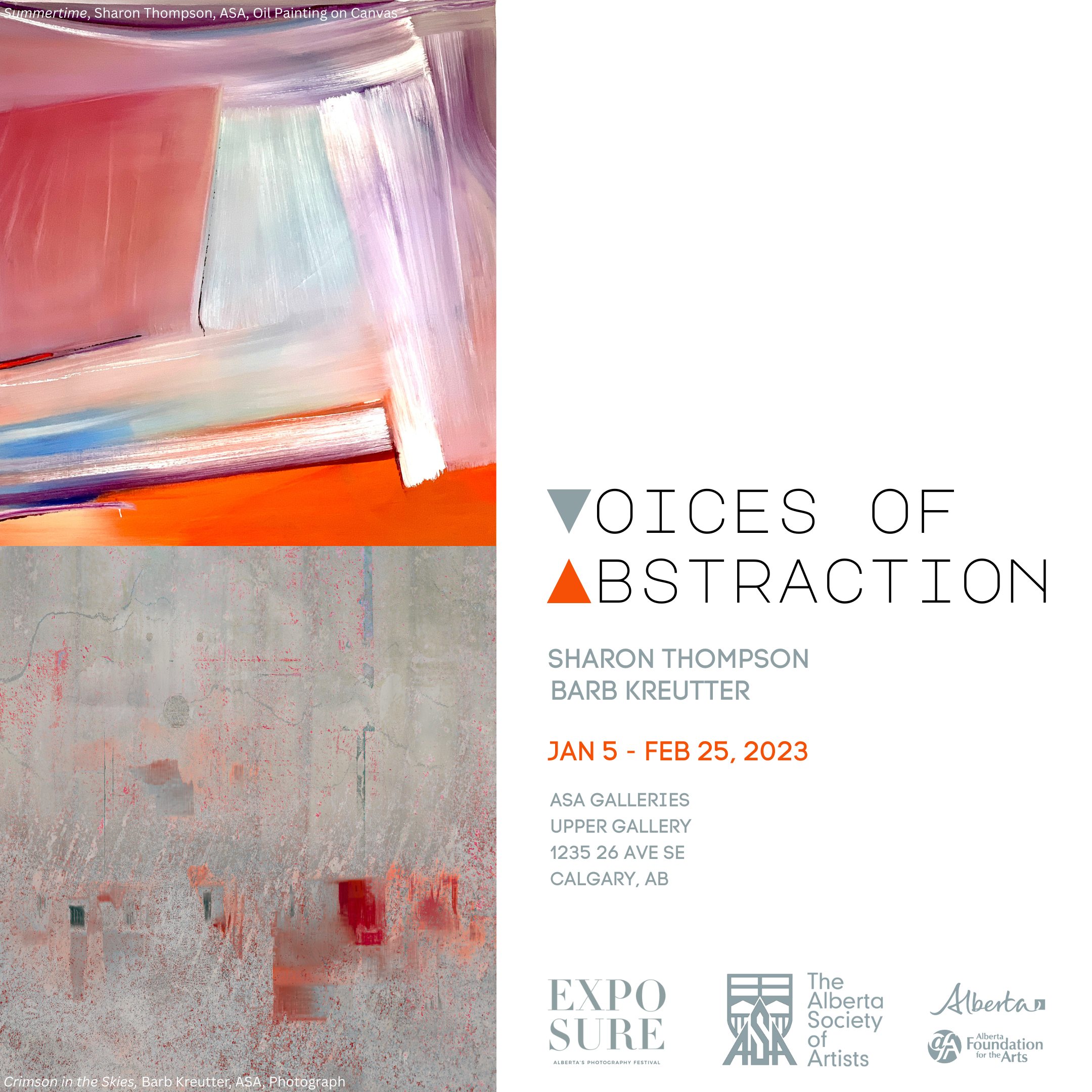 A Join Exhibition of:

Both Barb Kreutter, ASA & Sharon Thompson, ASA are attracted to abstraction as a compelling open-ended way to explore and bring together feeling and intuition without the mental directives and limitations necessitated by representation.

Both of their work is fundamentally structured. They achieve this by ensuring that everything in the piece is connected to everything else. The result is a distilled visual wholeness, a feeling of completeness, simplicity, and flow. This concern for interconnectedness also creates the spontaneous ‘feel’ of their work.

Barb’s photographs are a layering process that takes place both in the camera and again through the editing process, ultimately creating an abstract image that is also suggestive of the imagery embedded within the layering. Sharon’s oil paintings use a process of layering as well. Using wide brushes, she creates a layered spatial depth, intuitively selecting what to keep from previous layers and what to move into a new layer.

These layering techniques achieved by both of these artists have a similar sense of light and space. Their two different voices are very different, yet somehow, they share the same aesthetic.

BARB KREUTTER (BSc. MFA, ASA)
Barb is a Canadian artist who began her career as a textile designer after graduating with an M.F.A. from R.I.T. in New York.

She has recently discovered the abstract expressionist world of photography, creating images that enable her to explore her lifelong love of colour, texture and form. Barb has been successful in having her work juried into shows in the UK, US and Canada as well as being accepted for publication in the abstract art journal, Portfolio 2022.

See more of Barb’s information on her ASA Profile.

Sharon Thompson (BFA, ASA)
Sharon was born and raised near Peterborough, Ontario. She attended the Bachelor of Fine Arts Program at Queens University as a mature student, while raising three children. She graduated with a First Class Honours degree. She has travelled extensively and has lived in Wellington, New Zealand, Brighton, UK, and Seattle, USA. She currently resides in Calgary, Alberta.

Her work has been exhibited extensively in group and solo shows in Canada and the USA. She has received Ontario Arts Council grants, and awards including the Society of Canadian Artists Award, 2003, the Nan Yeomans Legacy Award, 2010, the De Serres Award, 2012. She has attended residencies both in Canada and the USA and was the recipient of a half scholarship award from the Vermont Studio Center, USA.

See more of Sharon’s information on her ASA Profile.