Chester Lees is a multi-faceted artist, educator and motivational speaker, who operates out of her studio in Turner Valley, Alberta.
Chester Lees, originally from Wales, trained as a graphic artist and became the first female company director in her field. She moved to Hong Kong in 1981 and studied for two years under Chinese master Fung Da. Chester began facilitating art workshops on her return to Europe, successfully fusing the control of Western graphic design and Eastern brush techniques, adding even greater freedom of expression upon her move to the open landscapes of Western Canada in 1988.

Chester was elected as a member of CAPES (Calgary Arts Partnership in Education) in 1997 and in the past 25 years has conducted art residencies in over 60 Calgary Board of Education and Charter schools. Art integration is her passion!

As well, as a current facilitator, Chester has conducted workshops and team-building retreats for the Epcor Centre for the Performing Arts, The Glenbow Museum (where performing as Emily Carr and Marilyn Monroe she supported two major exhibitions), The Telus Science Centre, and King’s Fold Retreat Centre. Chester is a regular presenter at the Calgary Young Writers Conference, and several other institutions.

Chester’s large-scale mural work can be found in several Calgary schools and institutions. Chester recently worked with a team of high-school artists to illustrate a major book publication, “From Blue To Red”. The book was honoured as the 2013 Alberta Young Readers Book of the Year.

Chester has held numerous exhibitions of her work in England, Wales, Hong Kong, Germany, and Canada. Her work is included in the collections of the Alberta Foundation for the Arts, the Bank of America, Hong Kong, and the Defence Research Establishment at CFB Suffield as well as in many private collections world-wide. Four of Chester’s artworks were recently selected to support the art exhibition accompanying the two Alberta Ballet productions of the Elton John based ballet, ‘Love Lies Bleeding’.

Chester continues to receive recognition for her work, including selection as Global TVs Woman of Vision in May 2006, inclusion in the CBE centennial list of most influential Albertans, and a nomination for the Artistic Innovation Award at the 2008 Mayor’s evening for Business and the Arts. She was thrilled to be included in the recent Reflections West Stampede Art Shows. Chester is honoured to be a former member of the Board of the prestigious Alberta Society of Artists and Active member of the Federation of Canadian Artists as well as a former board member of Sheep Creek Arts Council.

Chester now works out of her studio in Turner Valley.

Having trained as a graphic designer in her native Wales, widely-travelled Chester’s style has progressed from her Celtic-inspired detailed works of flora and fauna to large format landscapes and murals. Her move to the Canadian prairies brought about a love of the grasslands and expansive skies, increasing dramatically the size and format of her work.

Chester’s technique of heavily textured grasses against smooth vast skies places her work on the border between realistic and abstract. She has produced many commissioned mural-sized pieces on these themes.

A juried member of the Alberta Society of Artists, an Active member of the Canadian Federation of Artists, and recipient of Global Televisions Woman of Vision, Chester has spent over twenty years providing Artist in Residency programs to many Calgary institutions and schools. Now working from her studio in Turner Valley, she continues with her love of landscape and nature as themes for her work. 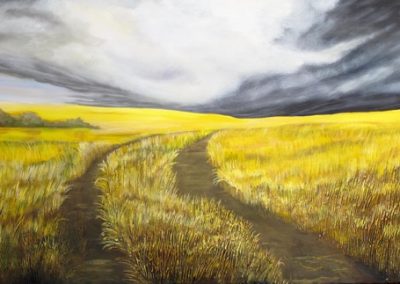 © Chester Lees When we walked in fields of gold