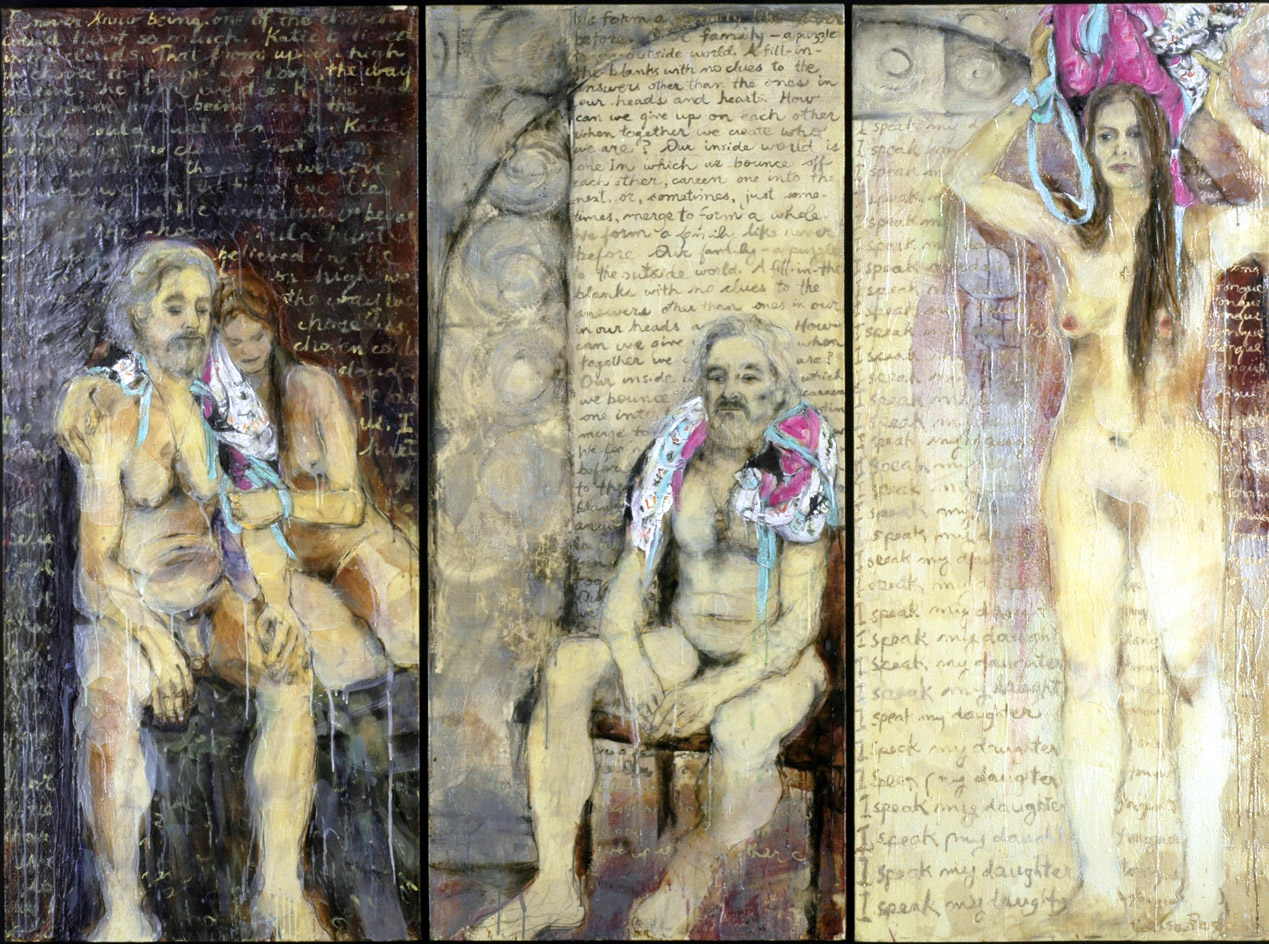 Calgary artist Teresa Posyniak brings to her art a versatile professional training that includes different disciplines and a wide range of materials. She has degrees in literature and drama: a BFA (University of Regina painting and printmaking, 1981) and an MFA (University of Calgary, sculpture, 1983). Over the course of her 40+ year career, she has worked in materials as diverse as steel, wood, concrete, handmade paper and felt, oil and other painting and drawing media and fabric. The scale of her work ranges from room size installations to small drawings and paintings. Since 1999, Posyniak has cultivated the use of hot wax (encaustic) and more recently, cold wax, in her two and three dimensional work, as a way of incorporating textures, drips, splatters and layers of tinted, glowing colours. Posyniak has always been a socially engaged artist and her activism, primarily on behalf of women, children and the environment, informs her practice. Notable among her works is Lest We Forget (1992), a large scale sculpture dedicated to missing and murdered Canadian women, which is permanently installed in The Law School at the University of Calgary in 1994, one of Canada’s first memorials of its kind. Teresa is often invited to speak to law students about the creation of this memorial. Posyniak’s constant themes of vulnerability and resiliency are reflected in her paintings and drawings of the female nude which are emotional, raw and layered in meaning. This interest in the women’s lives has led to an ongoing series depicting women Blackfoot elders called Consensus: the Blackfoot women elder series, a uniquely collaborative project with Siksika elder Linda Many Guns and Blood elder Beverly Hungry Wolf. Over the past ten years, Teresa’s focus on the figure has broadened to include the environment and how human activity is changing our climate. Her research into plankton and trees, our main sources of the earth’s oxygen, was reflected in her solo shows Eating the Sun (2016) and Drifters and Blooms (2017) at the Christine Klassen Gallery and the group exhibition Water at the Whyte Museum (2016) in Banff. In 2019, Posyniak’s show at the Christine Klassen Gallery entitled PONDEROSA is the culmination of a four year collaboration with BC poet and UBC (Okanagan) Creative Writing professor Nancy Holmes focussing on the ponderosa pine tree. During this period, Posyniak completed two artist residencies at UBC’s Woodhaven Eco Culture Centre and spent many hours with Holmes and her poetry to create dozens of paintings exploring not only the physical beauty of this species but also its relationship with the increasing fires plaguing western Canada and especially BC. Also a sculptor, Posyniak participated in the recent Art Gallery of Alberta show, Rebellious, featuring 24 senior Alberta women artists whose work appeared in the mainstream galleries in the 80’s and beyond, where she exhibited her large installation SALVAGE: remnants of hope and despair. The series of many dozens of 8’ tall wrapped tree/body-like linear pieces and cast paper columns are part of her continuing exploration into ideas related to vulnerability and resiliency, especially resonating in current times. A former art instructor at the Alberta College of Art and Design and the University of Calgary, Posyniak has exhibited widely in private and public galleries, including her 2010 solo show at the Glenbow Museum, I Speak My Daughter Tongue. A recipient of many awards and grants from the Alberta and Saskatchewan governments as well as The Canada Council, Teresa is represented in many private and public collections including the Glenbow Museum, The City of Calgary Civic Art Collection and The Alberta Foundation for the Arts.

Vulnerability and resiliency in humanity and nature are constant themes in my work, whether it’s sculpture or painting, figurative or abstract. My creative practice over the past 42 years is driven by my social activism related to women’s rights and the environment. I conduct my visual explorations in myriad ways using a very wide range of media and formats ranging from small paintings to large installations. I love experimenting with a wide variety of materials, including wax (both hot and cold) combined with paint and other media, handmade felt and paper, concrete, wood and other support systems for painting and sculpture. When the opportunity arises, I enjoy collaborations with artists, dancers, writers and those in other professions such as the sciences. These connections with others enrich my practice and often inspire me to pursue subject matter I’d never previously considered. 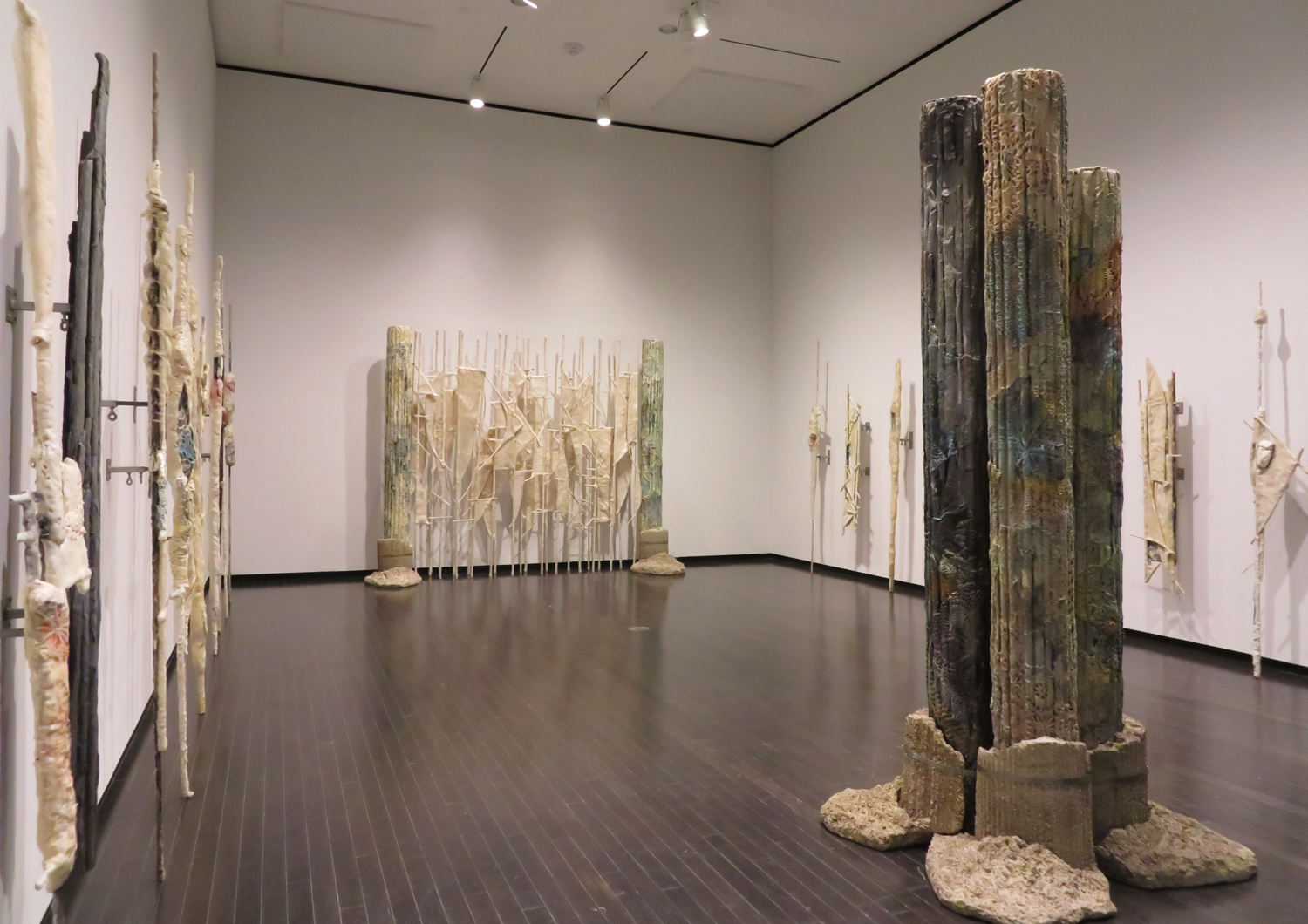 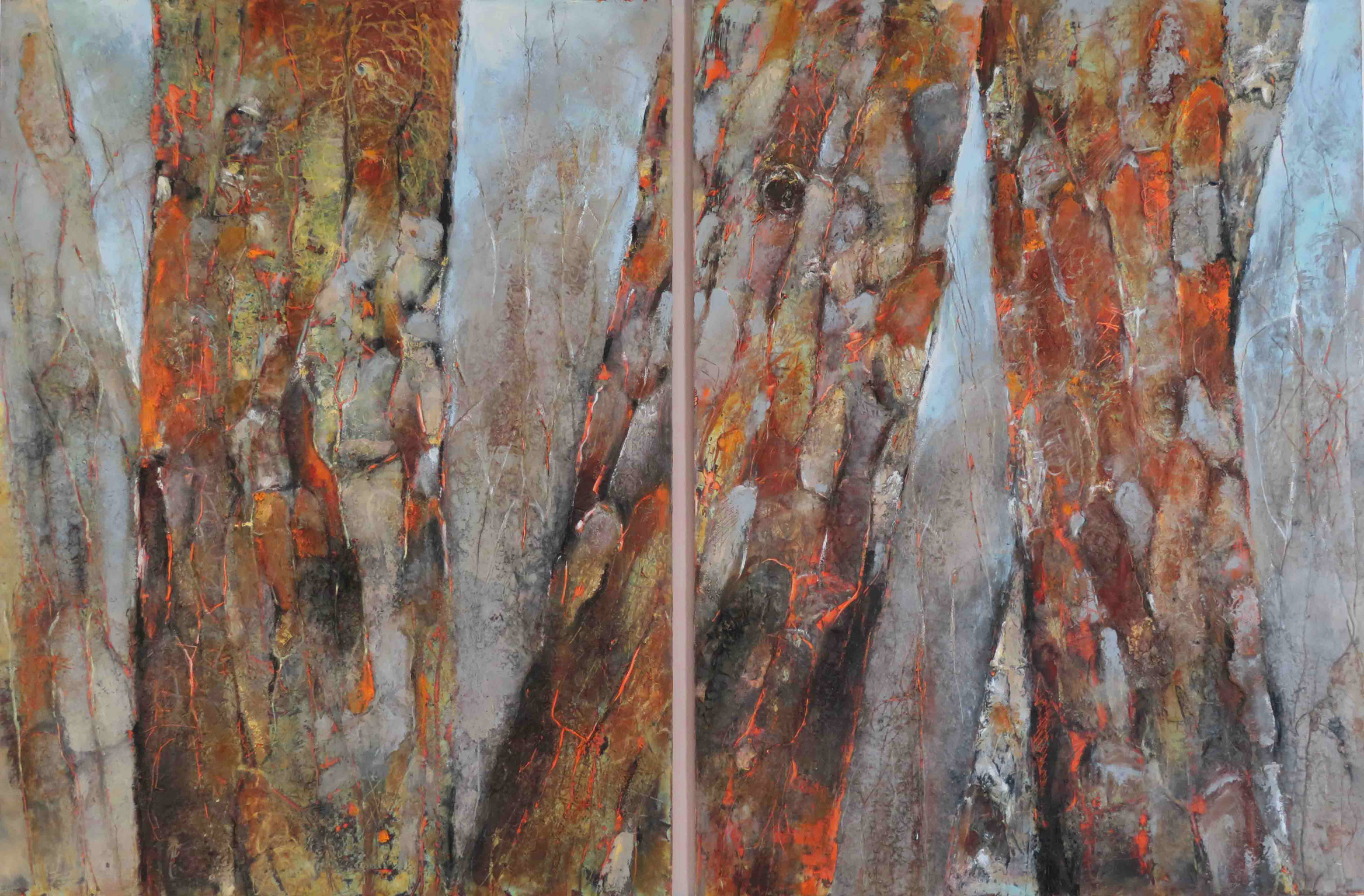