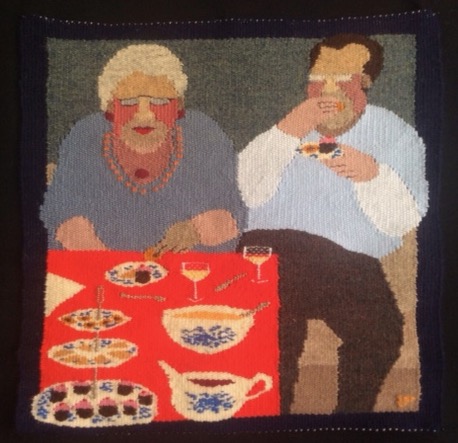 Liv Pedersen is a weaver of small tapestries. She came from Denmark to Canada in 1973 with a degree in Social Work. In 1974 she enrolled at AUArts, then ACA, and in 1978 she received a diploma in painting.

In 1981 the family returned to Calgary. For the next 26 years Liv worked full time as a handicap assistant for the Catholic School Board. In her spare time she continued to weave tapestries about her children’s lives and whatever captured her imagination.

Liv’s work has been juried into shows in most Canadian provinces, the US, China, Australia and many European countries.

In 2019 four small tapestries were commissioned for the New Hub Facilities YMCA in Calgary. Her work is 2 x represented in the Collection of Alberta Foundation for the Arts. She is included in numerous private and public collections nationally and internationally.

For many years Liv was a member of the now closed cooperatively run Centennial Gallery. She is a long time member of Alberta Society of Artists, Alberta Crafts Council and Canadian Tapestry Network.

The invitational international tapestry show ‘ALL THINGS BRIGHT AND BEAUTIFUL” is now on line because of the COVID-19 pandemic.

People and their interactions have always held my interest. In the past most of my narratives were based upon memory and designed with flat shapes and bright colours. When a larger size was required the story would be told in panels of mostly four. My favourite loom was and is the Dutch plank loom with nails hammered into the top and bottom of a drawing or cartoon, taped down on the plank. A cotton warp is wound around the nails and the weaving can begin with the aide of a blunt needle.

For many years my small tapestries were rectangular or square.Lately I’ve started to experiment with the shape to weave faces. The first ones were imaginative, later my interest changed to portraits. The focus has shifted to working with a monochromatic color scheme. I weave with comercial wool, but acrylic and other synthetic yarns also come in handy.
Weaving for me is a relaxing almost meditative process. It can easily be interrupted and fits in well with a fragmented life style. 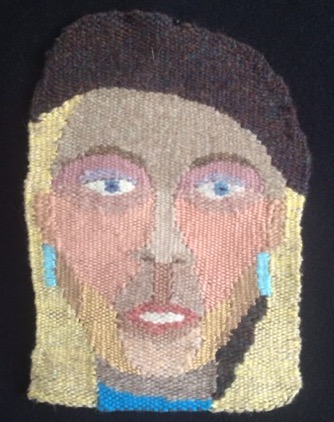